Why Work
With TCM 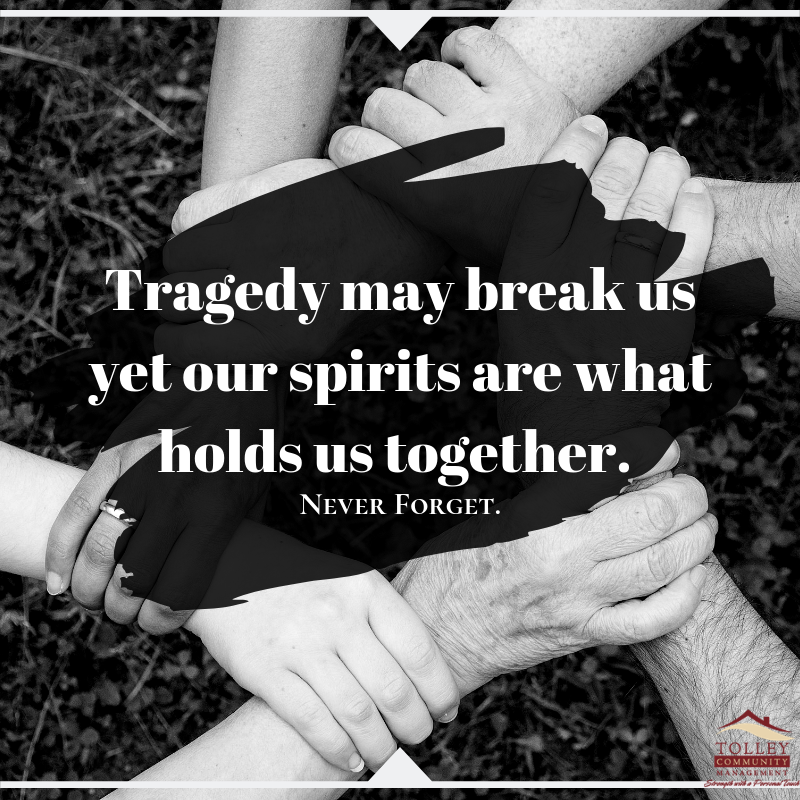 September 11, 2001 is a day that changed the lives of many of American’s.  It is a day that brought the country together, a day that we realized the world was no longer what we had pictured or thought it to be, a day that we stood in disbelief of what was happening around us.  It was the day that 4 planes were hijacked, with 3 of those planes flying into two very important buildings in the US, the Pentagon and the World Trade Center Towers.  Nearly 3,000 people lost their lives, heroes helped rescue so many, people risked their lives to help their country.  On December 18, 2001 President Bush signed into law to proclaim September 11th as Patriot Day (not to be confused with Patriot’s Day).

Patriot Day is not a national or federal holiday and most businesses are open and operate at normal hours.  However, we observe this day to show our thanks and appreciation for all the lives lost on this day in history in 2001.  Flags should be at half mast, it is encouraged to hang flags at your homes, many people observe a moment of silence at 8:46am EST which is the time that the first plane flew into the World Trade Center.  Many communities hold prayer services, those close to the affected areas may visit memorials or hold events to honor the fallen.

Growing up in DC, 9/11 was not a good day. My dad worked in the Pentagon at the time and I could not get ahold of him all day. (my parents are divorced, and I was living with my mom at the time) but lucky he was ok just missing for a whole day. My whole High school was under lock down, you could not leave but classes were not going on. Basically, everyone was walking around trying to get ahold of their parents.  9/11 will always be a day somber to be.

I was at work and it hit the news and our company owner let us all go home. It was the worst thing I have ever seen. I still remember the images and where I was standing when it happened.

I was in Orlando training with a new company when the towers fell. The first happened while driving to the training facility but I watch the second plane hit on television and then the subsequent fall of both towers. It really sucked because I was away from family and friends with a bunch of complete strangers, but the amazing thing was how we bonded together because of the shared tragedy. Of course, I couldn’t fly home so I drove back to Atlanta in a hurricane which most folks don’t even know hit Florida that week. I was fortunate enough to go to the 9/11 Memorial museum last October and is was an incredibly poignant experience. Seeing, hearing, and touching the various displays and learning first-hand accounts of all the people who were affected brought constant tears to my eyes and made me hold my son a little closer that night.

Sept 11th I was deployed to Sigonella Sicily and remember flying back over New York, our squadron was coming back home to Atlanta and you could see the smoke still coming up. I believe it was like a week or so after Sept 11th and we were one of the first planes allowed to be back in the air. Watching the towers fall on live TV while deployed is a feeling that one cannot describe with words. You remember what you were doing before you turned on the TV, news in the barracks spread to turn the TV on, and then your whole life changed.

I was sitting in the 1st period of the day, my senior year of high school, on September 11, 2001.  We were working on a senior project when another teacher ran in and told my teacher to turn on the news that a bomb had just gone off in the World Trade Center.  At that moment, no one knew it was a plane.  Within seconds of my teacher getting it on the news we saw the second plane fly into the Twin Towers and we knew this wasn’t a bomb nor was this a day we would ever forget.  The entire room went silent as we all just sat there in awe and disbelief.  A girl in my class, her stepmother was flying that day to New York and no one knew at the time which planes were hijacked or what had happened.  I remember us all consoling her and just praying and hoping that her family would be safe.  (thankfully she found out many hours later that her family was safe).  I was in an apprenticeship where I taught at a local elementary school for a couple hours every day.  That afternoon, I headed over to help my first and second multi-age classroom.  When I walked in, they had most of the lights off in the hallway and a TV on outside the office. The school was quite quiet yet the teachers trying to continue with the day. They decided not to go over it with the kids that day as it was happening, that their parents could talk to them that night and they were formulating plans of how to respond the following days when they knew they would be asked many questions.  Sitting there thinking how you explain what happened to a 6-year-old is never something I thought I would ever have to experience.  That day took away the innocence of many.

This is a day that many will always remember.  Take a moment and observe this day and what it means, even if it is just for a second.